Hip Dysplasia: Can a Shape and Surface of Whelping Box Prevent It?

Hip Dysplasia – Nature/Nurture Side of Things

Hip dysplasia is one of those conditions that all dog breeders are very well aware of and have been making considerable efforts to eliminate. Almost every breed’s parent club recommends screening breeding stock for hip dysplasia. HD is the reason why Orthopedic Foundation For Animals (OFA) was founded.

However, with all the effort that went into monitoring the inheritance of the disease, with incredible accumulation of data spanning over 50 years, the consensus is now emerging that the causes of  hip dysplasia are only about 20% genetic and 80% environmental. You can mate two parents with excellent hips and get dysplastic offspring, or mate two dysplastic parents and get pups with normal hips. Some scientists go as far as to say that hip dysplasia is predominantly a bio-mechanical process, with genes playing a very limited part.

Theories that describe HD as mostly a bio-mechanical condition point to the fact that HD affects breeds with higher ratio of weight to height, and secondly that research has shown overweight individuals within the same breed to be twice as likely to develop the condition.

OFA data lists Bulldog and Pug as the two most affected breeds and Italian Greyhound and Whippet as least affected. Talk about compact weight juxtaposed to light, lean body!

In a study that compared Lab puppies on restricted diet to those on control diet, the results were striking  (Vanden Berg-Foels et al 2006). By the age of 6 years puppies fed a restricted diet had 40% less evidence of HD than the controls, with heaviest dogs affected the most.

Chubby puppies are very cute, however their risk of developing orthopedic problems is almost twice as big (pun intended) as for lean puppies. But before you measure out perfectly controlled portions of food for little gremlins you can do something else to reduce environmental risk for hip dysplasia.

The Whelping Box and HD?

Indeed, there might be another environmental factor we are overlooking- the whelping box! When you have a chance to watch some videos of wild canines, you will notice how the den is shaped like a bowl. Its surface is compact dirt. When the pups are nursing they have great traction under their feet. They do not use knees and bellies to crawl as much as pups in a flat whelping box are forced to do. The concave shape informs blind and deaf newborns where “up” and “down” is, and they all pile at the bottom of the den, forming a thermally efficient little gathering.

What is remarkable about the differences between a natural den and a man-made whelping box is that it just may explain why all puppies are born with normal hips and develop dysplasia afterwards, and why wild canines do not suffer from hip dysplasia. Does the damage happen sometime after birth in a man-made environment?

In multiple studies puppies were shown to have normal hips at birth and show signs of laxity in hip joint by the age of 2 weeks (the head of the femur does not fit tightly into the acetabulum). Joint laxity is a key risk factor for developing hip dysplasia. So what happens in those 2 weeks? Now if you look at newborn puppies nursing in a whelping box you will see feet flaring about looking for traction, or puppies putting their weight on knees and hips. Both over-flexing the legs and putting weight directly on knees and hips put undue stress on the hip joint and can result in luxating that joint.

Can some easy adjustments to a whelping box make a difference? Here is a simple experiment I did. The first photo shows my litter nursing in a flat whelping box lined with a Sherpa blanket. The next photo was taken after I put a rug pad under the blanket. The pad changed the traction on the bottom of the whelping box. Notice how the weight distribution changed from knees and hips to feet. 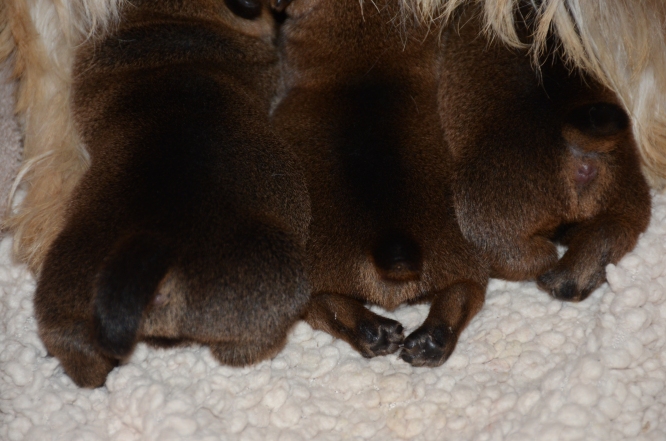 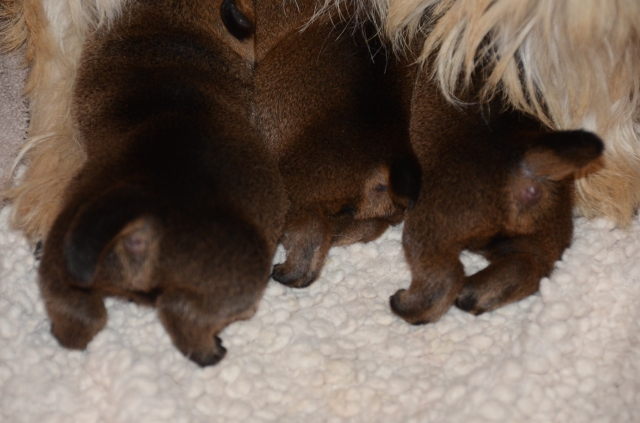 Again, same two images side by side. I could not believe the difference! 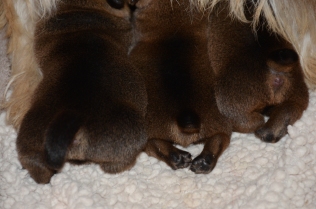 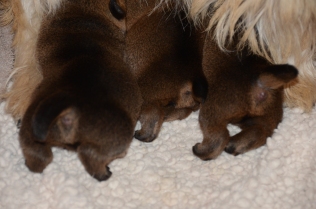 To go a step further in creating traction I put a rug pad over the blankets and all of a sudden the puppies no longer looked like cute blobs we are used to seeing but more like their wild cousins, lifting weight up on all their limbs. 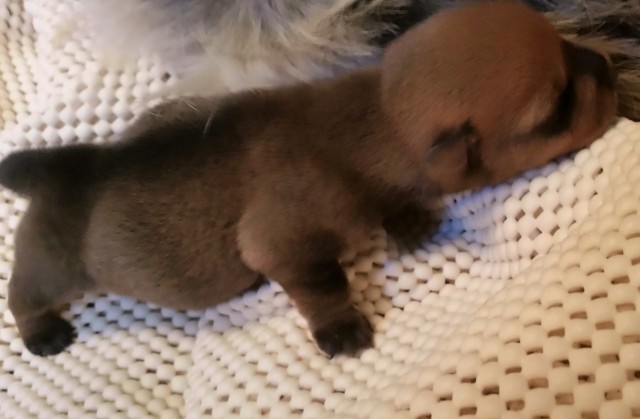 I also videotaped the result in how the puppies moved. Watch this video here.

Are we on to something here? After sharing this experiment with friends on facebook I got some great tips on the surfaces with traction. One can buy Sherpa pads with rubberized backing! Who knew? Or use a bathroom rug that has rubber grips on the bottom.

I am also experimenting with creating a concave den. For now I’m using my whelping box. I have padded the outer rim with towels and once I got the shape curved inwards from all directions I laid a rug pad and then a Sherpa blanket over it.

Here is what my typical whelping box environment looked like prior to this experiment. 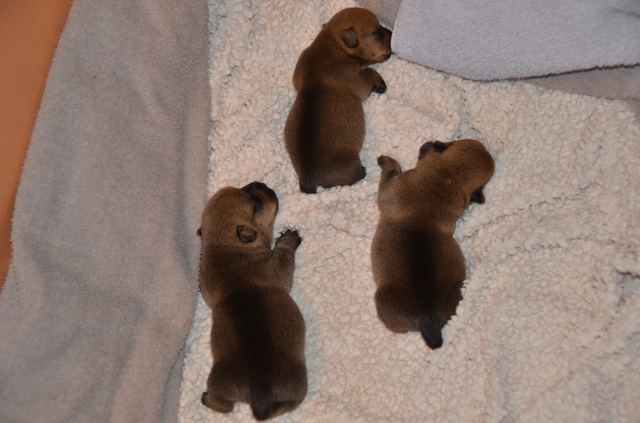 And here are the same puppies after I made the concave den for them. 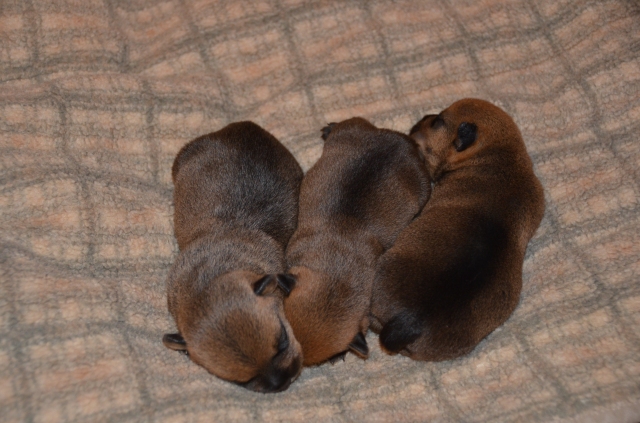 I believe that a den curved inwards, with surface that has good traction might be a very good idea. I am going to design something more permanent than a pile of towels for my next litter, but I think that this trio likes their new makeshift nest.

128 Responses to Hip Dysplasia: Can a Shape and Surface of Whelping Box Prevent It?