Sensitive Subject On Human Side Of Things

There are volumes written about dog nutrition, hundreds of studies conducted (admittedly, the majority funded by dog food industries) and there are as many myths as proven theories floating around. It is one of those highly charged subjects and pretty much every breeder ends up in one of the “camps”. I wish there was more common sense and factual data than slogans, and less posturing, but alas, it is not so. Yet.

Those who feed mass produced dry dog food are often looked down upon by those feeding raw or home-cooked diets. What one feeds the dogs has become for some people a sign of their superiority, a dog-world version of designer label snobbery in hand bags. The label, more often than not, matters more than the actual product, and frequently the entire product is one giant label. I love designer bags as much as any other snob, but when it comes to dog nutrition it should never be about the owner’s image. It should be entirely about the dog.

If the dog fares well, that is all that matters. Personally, I find nothing inferior about decent quality kibble, rotated appropriately.

Now that I got that off my chest let me admit to cooking for my dogs, and putting a fair amount of effort into it, and doubly so for puppy diet. Don’t laugh. I know how excessively crazy that might look but let me explain myself.  I do this, because it makes sense.

You are what you eat. Literally. Every cell in your body (which by the way is not older than 7 years no matter how old you are) is composed of molecules derived from what you ingested. And ingested relatively recently!  Same for every living creature.

Aside from the obvious, not ingesting toxins, it is a big deal to get everything you need and not have any deficiencies. That process is bio-chemically well understood. In order to get the building blocks for your forever changing body, you need to eat a varied diet. No poor supply areas and no “overdose” on bad stuff and voila! – you are eating healthy.

And “you” in the above paragraph can be a tasseled wobbegong, a human or a dog.

It is now an accepted fact that dog food should be rotated to avoid imbalances and deficiencies. It is no longer OK to not know that! Easy peasy – switch between kibble bags every once in a while. I believe that it is possible to provide high quality, balanced nutrition feeding kibble varieties in rotation.

What gives me pause, though, is the “bad stuff”. Undeniably, there is some fabulous dry dog food  available these days that was not possible 20 years ago. However, even the best quality kibble, and best quality for dogs means meat and lots of it, has to have a long shelf life to be sellable. Just imagine what has to happen for meat to have a shelf life of months. Mostly it can be summed up as “bad stuff” or at least “not so great”.  That is my main concern in avoiding feeding kibble for too long stretches of time. That and something I just skipped right over but have a strong concern about- what assurance do I have that all the ingredients are good quality, and that they are what they are described to be? How many recalls does it take before admitting that choosing every ingredient and cooking myself is an obviously better way? 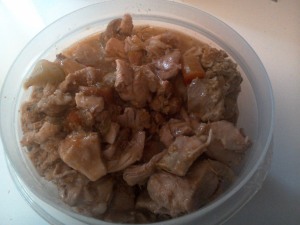 Gut Bacteria And Such

It is a commonly overlooked fact that GI tract is the largest part of the immune system. It is an organ of immunity, through which food passes, gets processed and absorbed into the bloodstream. Let’s just pause for a second. Food is something that came from the outside and when GI tract is done with it, it is absorbed into the bloodstream! Not to pretend I understand every aspect of this process, let me just say in a great oversimplification that it takes antibodies and gut bacteria for that process to be possible.

Without gut bacteria, the digestion of food would not happen. And it does not happen when a particular colony involved in digestion of a particular food is too weak. You don’t use it, you lose it. When a dog is fed the same diet for a prolonged period of time, inevitably its gut bacteria is not going to be diverse. Bacteria involved in breaking down the particular food he is eating will be plentiful, however, if you try to switch that dog’s food to another, he will not be able to digest it. The colonies needed to process the new food would have been totally taken over by the ones fed what they thrive on. Gut bacteria is the reason for slow, incremental switching between foods. If you do it slowly, by adding only a tiny bit of new food, the marginalized colony needed to break down the new food has time to grow, now that it has nourishment.

When you feed a dog a varied diet, like a home cooked diet similar to the way people eat, something different every day, or at least every few days, then the gut bacteria of the dog will be very diverse, very healthy. Chicken on Monday, beef on Tuesday? No problem! 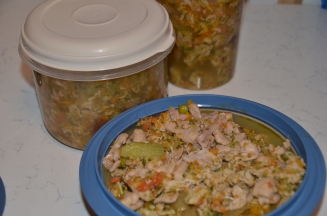 “Food Education” During Pregnancy and Through Mother’s Milk

In several studies of rats, mice, rabbits and human babies prenatal exposure to certain foods, as well as early exposure through mother’s milk, was shown to lead to enhanced preference later in life, and by extension influenced the nutritional value of choices. Babies whose mothers were asked to eat carrots during pregnancy exhibited preference for carrot flavored cereal during weaning over plain cereal, unlike babies whose mothers were asked not to eat carrots during pregnancy. On the negative side, statistical research showed high likelihood of alcoholism in people whose mothers drank alcohol during pregnancy.

It is a safe assumption that similarly to other mammal species from the studies, mother-dog’s diet during pregnancy and during nursing matters to puppies not only for its nutritional value but also as a natural food education. My approach to feeding a dog, and especially during pregnancy and lactation, is good variety of healthy protein sources supplemented by a wide variety of fresh vegetables and fruit. Why would I want my puppies to have a preference for wholesome food? Because it would make feeding them a healthy diet a welcome endeavor. Their owners will be heartily thanked at every meal for their extra effort.

By the time the puppies are ready to be weaned they have been primed to like all kinds of foods throughout prenatal exposure and during nursing. Now, we are on to imprinting  through exposure to all sorts of taste and texture.

I start the puppies usually on one raw ground meat or another, soaked in goat’s milk for easier intake and palatability. Goat’s milk has smaller molecules than cow’s milk and is easier to digest. The reason for raw meat are naturally occuring enzymes, which will make digestion easier. Within days the puppies move to a second raw meat type, soon third and fourth. About a week later they have their first cooked meal. If everything is going great, I add wetted kibble to the menu.

As of today, at 6-weeks of age the boys have tasted chicken, beef and turkey (including muscle meat and organ meat plus some ground cartilage), as well as eggs and fish: salmon and mackerel. They had some carrots, kale, blueberry, cranberry, apple, broccoli and spinach. They drank mother’s pudding with pumpkin (all time favorite) and goat’s milk.

They also tried two kinds of kibble. No enthusiasm here, but at least they nibble on that from time to time (in between naps).

P.S. Happy to announce a perfect scissor bite in all boys, 6 over 6 incisors. Ready for some wholesome food chomping!